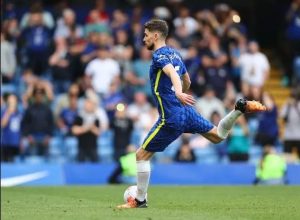 Well, that was a weekend, eh?

My mate Granit slamming in a worldy to put Man Yoo to bed?! As Thom Yorke would say, “for a minute there, I lost myself..”

Meanwhile, after falling back down from Cloud 9, the predictions game, for most of us, still proved harder than scoring from 12 yards.

Only 11 punters scored 30 points or more and from that melee, our weekly £20 prize winner emerged with perhaps the lowest winning score ever (Dan! Dave! Run the SQLs!)

Tom Wooldridge-Stevens 35 (5) edged home virtue of a point given to him by the correctly predicted WBA shut out or the Millwall 98th minute eqaulising penalty or Chelsea’s 90th minute face saving winner.

And well done on your second-in-a-season taste of prize money!

So, it was grim at the top, so what about the bottom?

You could argue it wasn’t all bad as only FOUR players scored 15 points or less.

But this meant Justin Corliss 13 (0) brought up the rear with probably the highest worst weekly score ever. (Dan! Dave…)

Weirdly, it was all quite good…most popular score was Swansea’s 1-1 draw with Middlesbro – 19 of us got that!

Seven got Brighton’s “Desmond” with JWP

However, this week’s best correct score, and new Best Correct Score of the Season, goes to Mike Krasnowski for his children’s-laughter-not-screams-is-the-energy inspired, Man City 5 Watford 1!

Martin Stafford was on “Bet of the Week” position 60th in Week 10 so we asked him to provide a treble selection for the £3 “trixie” bet.

He went way left field with a darts selection, which is great, but the matches aren’t til Thursday!

So we’ll have a double update next week…

Danny Ashworth is at 45th this week….

Danielsan, I need your 3 team selection by Friday evening, please!

You get another go to make amends….

Ben Hogwood stays top of the shop, now 7 points ahead of Simon Lindq, who in turn is three points clear of Anders H…

Patricia Fernandez is still bottom, but now only one point behind Tim P, who in turn is 1 point off Greg F…

Here’s how it is so far…

Aaahhhh the magic of the Cup! Semi Final ties in Week 13!

In order to be invited to enter the PAS Champions League 2022-23 you will have to finish in the Top 32 after 13 weeks of play. Currently sneaking the last spot is, the already sorted… Dave Crisp!

Lovin’ that plant power in Gloucestershire!