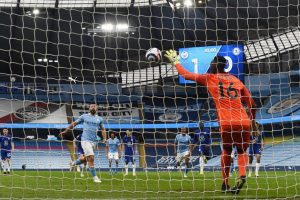 So the curtain comes down on yet another PAS season, and it was trying, right to the bitter end.

Can PAS continue to flourish and spread joy in such a harsh environment of unpredictability?

It was yet another unremarkable PAS week considering only 6 people managed 30 points or more!

You can give me that straight back for your PAS Euros entry fee!

No doubt glad the season is now over are the 34 bods who couldn’t rustle up more than 20 points this week.

What a season eh?!

Five didn’t even get a correct score.

One didn’t into double figures.

Good work people…most popular score was Brentford’s 1-3 win at Bristol City– 19 of youse got that!

6 got Barnsley’s “Desmond” with Norwich City

Darren McC, Simon B & Eddie O we’re so happy for the Reading 2-2 Huddersfield Town they will actually wear that skirt..

Julian F, Sam A & James C will shout out loud about the humbling of Spurs by Leeds Utd

Danny A believed in Everton. A 0-1 kinda belief…

Lewis M said “Look at me! Yes! Me!” for his Oldham Athletic 0 Forest Green Rovers 3

However, this week’s best correct score, and Correct Score of the Season, goes to Julian Fernandez for his don’t-call-it-a-comeback inspired, Derby County 3 Sheffield Wednesday 3!

Simon Lindquist was on “Bet of the Week” position 65th in Week 12 so we asked him to provide three results for our “trixie” £3 bet.

We won, but it could’ve been so much more…

“Well my current P-A-S season has pretty much mirrored Woking’s National League one . . . a decent start followed by an ignominious fall from grace that has seen both of us plummet down our respective tables!!
I’ve decided to go for a (hopefully safe) home wins treble . . .
First Leicester City to beat Newcastle Utd in the Friday evening Prem League fixture
Then Liverpool to beat Southampton in the Premiership on Saturday evening
I was going to go for 3 x Premiership games on sequential evenings . . . but Arsenal’s abject performance this evening . . . a game I’m sure you are still fuming over . . . and the fact that they couldn’t buy a goal at the moment . . . possibly even against an already relegated (by then) West Brom, has caused me to re-think the third selection . . . so I’m going for
Morecambe to beat Bradford on Saturday afternoon in League Two
So three homes:- Leicester, Liverpool and Morecambe”
No, yes and yes.
First rule of PAS Club is never…
Change your mind!

30 games to predict right through from May 15th to 31st

And the BIG day on May 15th when they get to predict on almost everything in the actual FA Cup Final!

30 games to predict right through from May 15th to 31st

And the BIG day on May 29th when they get to predict on almost everything in the actual Champions League Final!

In order to be invited to enter the PAS Euro 2021 (with benefits! Read the rules…), you will have to finish in the Top 32 after 13 weeks of play. Currently sneaking the last spot is Frank Sidebottom tribute act…Alex Rossi!

Thank you very much for taking part in another fab (but really weird) season – we couldn’t do it without you!

Make a note as you’ll be getting a constant stream of reminders from, erm, tomorrow?  : )

Special thanks to Dan & Dave once again for all their tireless work behind the scenes – they’ve doen us proud yet again.

So don’t worry, Matt Hancock hasn’t got your winnings – I have!