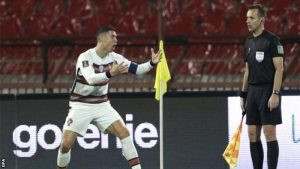 Scored 30 points this week? I’m afraid you’re a failure given the rich pickings available to pick up in yet another divisive, exciting, unbelievable International Week!

Thirty players scored 40 (FORTY) points or more this week, 9 got 50 (FIFTY!) or more, and an elite foursome notched up a mighty impressive 60 (SIXTY!!!) points plus!

It was a scrap right to the finish as the PAS record of 67 points was under serious threat from all sides. Dave C & Pete B were thwarted at sixty points, newbie Pete C must be wondering what all the fuss is about as he just fell short of a weekly win on 61 points.

But they all got a correct score.

Only Ric P didn’t, and he finished on 23 points. Weird, non?

Patricia F would’ve been bottom of the pile but Dan H, Gary B and Andy S all foolishly followed Mr 2-0 15 (1) into International oblivion…

Bumper to bumper…most popular score was Scotland’s 1-1 draw in Israel– 38 of youse got that!

Twelve were all over the 0-3 Kosovo v Sweden

Eight were grateful for the 3-1 Spanish win over Kosovo

Four got the dull-all at Windsor Park

However, this week’s best correct score goes to…no one, as it-can-only-be-a-unique-scoreline!

John Jennings was on “Bet of the Week” position 33rd in Week 6 so we asked him to provide a treble selection for the £3 “trixie” bet.

Chris Dixon is at 45th this week…

Pete Clarke climbs seven places to go top in his first season, 13 points ahead of Charlie H in second, who in turn is one point ahead of Ben H…

“Johnny Panic & The Bible Of Dreams”:

Dan Hogwood is taking one for the PAS PR team, slipping one to the bottom slot, three points behind Mr 2-0, who in turn is 3 points off Gary B…

So, we were denied the chance of an all “Syndicate” final..wonder if they would’ve fixed that?!

In order to be invited to enter the PAS Euro 2021 (with benefits! Read the rules…), you will have to finish in the Top 32 after 13 weeks of play. Currently sneaking the last spot is still the (firm gripping) handy…!

How can you not have goal-line technology for an international game? Huh??!!