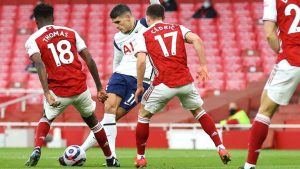 “The Things That Dreams Are Made Of”:

A year ago we had this…

“We’re living in strange times right now – strange things like…Will football end just as Liverpool have re-invented it with a blast from the 80s? Will we ever be allowed out of our houses ever again?

Will we eventually get sick of eating plain pasta? And will my quest to win the competition I founded be scuppered just as things look as rosy as they’ve ever been? Yep, proper strange times…”

A lot changes in a year, eh?

6 mere mortals passed the 30 point barrier this week and that included a Fernandez  – so yeah, proper strange week…

Francesca F gave it her best shot but was blasted out the water by Neil Osborne 35 (5).

This week’s £20 winner wasn’t helped by any last minute goals or misses or VAR decisions – he simply nailed a 9 pointer and that did for the chasing pack. Simple.

Well done Neil, my little girl is in bits – but has learnt the valuable life lesson to never trust Yorkshire folk to help you out if you’re a Red Rose!

30 punters failed to cross the 15 points line this week – brutal!

Fourteen poor souls couldn’t muster a correct score between them either.

Like hen’s teeth…most popular score was Citeh’s 0-3 win at Fulham– 27 of youse got that!

Mark Seels was on “Bet of the Week” position 65th in Week 4 so we asked him to provide a treble selection for the £3 “trixie” bet.

We did a Liverpool at home…

Paul Henshaw is at 11th this week…

Mr H, I need your 3 team treble by Friday, please! We need a winner – let’s see if you best the last “syndicate” member’s effort!

Simon Buxton climbs one place to the top, 1 point ahead of Neil O in second, who in turn is five points ahead of Pete C…

Howard Thomas remains anchored to the bottom, now three points behind Dave C, who in turn is 2 points off Dan H…

“The Sound Of The Crowd”:

Who will make the semi-finals?

Quarter Finals went ahead this week…

We had 1 successful joker! And, ermmm, 1 hammering! And…

But what were the scores? And who went through?!

In order to be invited to enter the PAS Euro 2021 (with benefits! Read the rules…), you will have to finish in the Top 32 after 13 weeks of play. Currently sneaking the last spot is handy…Andy Kelly!

Semi Finals draw has taken place and will be broadcast on the What’s App group very soon!