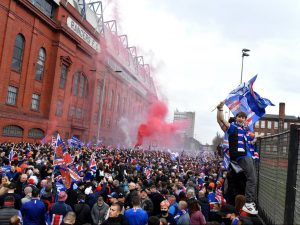 So, Covid continues to put pay to our fixture list, and boy, did some of us need that extra game eh?

In a week that saw yet another game postponed, only 13 players managed to score 30 points or more!

Three of them even managed to top 35 points.

John K was the early pacesetter. And it was all about an early start as Sunday & Monday games offered scant return…

Our £20 weekly winner amassed a massive 19 points early doors, cruelly snatching a veteran PASer’s moment of glory from his grasp to consign him to wait even longer for that elusive weekly win (and he’s been waiting since the 90s folks!)

Yep, Lee Ford 40 (6) must have been happier than a Burnley fan (or one of them lot down the road) this week as the ridiculous VAR decisions enabled him four points that denied Charlie H the weekly win!

Well done sir – your enthusiasm for PAS has been infectious (no pun intended) since you joined, a well deserved win – more power to your predicting elbow!

“We Will Always Love You”:

A crippling week for some, especially the 8 bods who scored no more than 15 points.

And five of them didn’t even get a correct score!

Didn’t we have a luvverly time…most popular score was Leicester’s 1-2 win at Brighton– 31 of us got that!

Twelve got the dull-all at The Hawthorns

Nine more got the 3 goal demolition of Sheffield Wednesday

Five had Motherwell’s 3-1 win over Livingston

Norman Lee was on “Bet of the Week” position 45th in Week 3 so we asked him to provide a treble selection for the £3 “trixie” bet.

“Cardiff, Leicester and Livingston all to win”
No, yes, no…

Seelsy, I need your 3 team treble by Friday, please! We need a winner – let’s not get all “Scousey” eh?!

Howard Thomas slips a couple of places to anchor the table, two points behind Dave C, who in turn is 1 point off Gary McC…

But what were the scores??!

As you’re well aware we had to postpone last season’s competition at the quarter final stage…but we’re back! Next week!

Here are those fixtures…

In order to be invited to enter the PAS Euro 2021 (with benefits! Read the rules…), you will have to finish in the Top 32 after 13 weeks of play. Currently sneaking the last spot is the Daddy…Nick Hogwood!

Nothing to see here…