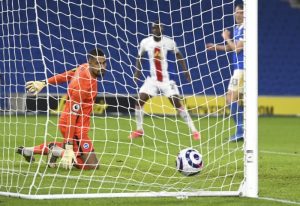 “Oh, I do like to be beside the seaside…”

It was a proper bunfight to be the best of a bad bunch in Week 2. Well, not that bad a bunch…and not much of a bunfight in the end either actually.

Tim P & Paul H tried their best to last the distance but fell away when it really mattered.

Neil O really made a push for the line…

But heading up the quartet who got nearest to flirting with a weekly win was my new Head of Debt Chasing, Simon Buxton 44 (8).

Mr B showed the same ruthlessness in point collecting as he does with securing late entry fees (ask Jack!) and has Newcastle’s audacity to score at OT  to thank for securing the twenty nicker.

Good work Simon! You can put him down now….

Not the best week to be celebrating a “big” birthday then.

Just when you thought it was safe to go back to Parkhead…most popular score was Leicester’s 1-2 win at Villa – 33 of youse got that!

6 turned up Burnley 0 WBA 0. Then smiled a little bit as they thought of those poor souls that were spared actually being there…

Reagon K was all over the 0-2 to Boro

Lewis Marriott was on “Bet of the Week” position 11th in Week 1 so we asked him to provide a treble selection for the £3 “trixie” bet.

It was a fail…

Greg Fleming is at 33rd this week….

Gregor, I need your 3 team treble by Friday, please! Remember, the family name is on the line here…no pressure!

Hira Yonzan remains rooted to the bottom, one point behind Mike K, who in turn is 1 point off Howard T…

As you’re well aware we had to postpone last season’s competition at the quarter final stage…but we’re back! Next week!

In order to be invited to enter the PAS Euro 2021 (with benefits! Read the rules…), you will have to finish in the Top 32 after 13 weeks of play. Currently sneaking the last spot is the not so boing-boinging…Jerry Storer!

Nearly all the payments have come in – thanks! Anyone who hasn’t got round to it, please do as soon as possible…or Simon B will come a-knocking!