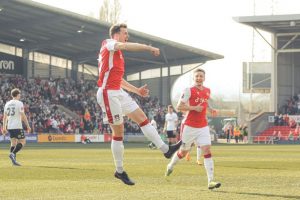 ‘Twas a thrilling week so it ’twas (no, I don’t know why i’m speaking like that either…) and most thrilled (of the 30 who 30 point plussed) was Neil Meredith 41 (7) who just sneaked past the unlucky Dom W (thanks to that late Portuguese goal on Thursday!) to lay claim to this week’s £20.

Well done la, a fine win in a bizarre but enjoyable International Week!

Runcorn and her triptych of bridges will be so proud …#wool

Meanwhile, at the other end of the table, the quest to bridge the gap was  in vain.

Only 7 didn’t notch a correct score though!

However, a sub 15 point score this week is going to hurt you…

And breathe…most popular score was Argentina’s 3-0 win over Venezuela– 24 of youse got that!

7 got the dull-all for Doha in Accra

4 got 4 goal demolition of Chile by Brazil

However, this week’s best correct score goes to Bijay Lama for his there’s-a-moose-loose-about-this-hoose inspired, Canada 4 Jamaica 0!

Dom Webber was on “Bet of the Week” position 60th in Week 6 so we asked him to provide a treble selection for the £3 “trixie” bet.

He was either off foraging for Spurs v Toon tickets and forgot or was keeping his spot on predictions for himself!
He’s a lovely lad — I hope he got his tickets…

Danny Ashworth & Ric Pardoe are at 45th this week….first out the hat was the “hot on National League”, Ric P!

Ricardo, I need your 3 team selection by Friday, please!

More of the same as the other week please mate!

Jason Morris (or is it Tony?!) stays top, now 5 points ahead of Anders H, who in turn is four points clear of Simon B…

Here’s how it is so far…

Congrats to our Quarter Finalists – you’ve made it through to the money rounds!

In order to be invited to enter the PAS Champions League 2022-23 you will have to finish in the Top 32 after 13 weeks of play. Currently sneaking the last spot is, not that one, this one…Simon Lindsay!

“Remember, kids, violence is never the answer, especially if it’s going to subject everyone to a full week of hot takes, polarised op-eds and memes. Oh Will! How could you! The Fiver is also sad that the incident has instantly become the most famous and notorious on-stage hand-jaw-interface scenario in history, eclipsing that time Jerry Sadowitz took to the stage in Montreal and opened with “I tell you why I hate Canada, half of you speak French, and the other half let them” with predictable consequences…” – The Fiver