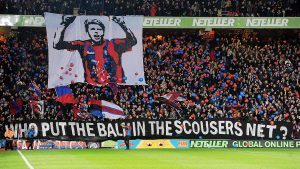 It was a proper bun fight for the weekly prize going into Sunday with as many as eleven contenders vying for the crown (over 20 players scored 30 points or more, btw) – and, at one point, we were considering our first debutant double weekly winner…Imagine! Jeeez.

Neil O was sitting pretty with his City 9 pointer but failed to capitalise and Richard H & Scott H were both up there but ultimately left angrily pounding the ground with St Johnstone 92nd minute hate.

Tom Wooldridge 41 (6) popped up happy clapping Son’s 88th minute goal that 5 pointed him all the way to the bank. £20 Tom – you’ve got Spurs to thank!

Personally, I think it was Bukayo’s winner at Villa that sealed it for you…

Another medicore clump of a week where only ten PASers scored 15 points or less.

So who was left wanting?

Beginners luck is one thing, but beginner’s catastrophe is very much something else…welcome to PAS Luke Stafford 10(0), you’ve truly arrived!

I feel sick…most popular score was Leicester’s 2-1 win over Brentford– 28 of us got that!

Tom W-S got the dull-all at Fratton Park

Martin S turned up Gillingham 0 Sheffield Wednesday 0. Then sobbed a little bit as he thought of those poor souls who were actually there.

However, this week’s best correct score goes to Howard Thomas for his babby’s-yed-and-pea-wet inspired, Wigan 4 Morecambe 1!

Joanne McKeown was on “Bet of the Week” position 83rd in Week 5 so we asked her to provide a treble selection for the £3 “trixie” bet.

“sorry I only keep half an eye on this stuff but I do have my 3 suggestions for the weekly bet:

Sunderland, Portsmouth and Bolton to win… I only look at league one these days!”
Draw – draw – win = nowt
Unlucky though Jo!

Jason Morris (or is it Tony?!) stays top, now 3 points ahead of Anders H, who in turn is six points clear of Andy C…

One won their game with 22 points & two lost their games with 21 points!

All to play for then…sort’ve

Aaahhhh the magic of the Cup! Last Sixteen ties next week!

In order to be invited to enter the PAS Champions League 2022-23 you will have to finish in the Top 32 after 13 weeks of play. Currently sneaking the last spot is, the helped from the sidelines(?)…Kate Slee!

My word, the state of the Week 7 fixtures…