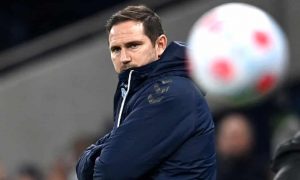 It’s shaping up to be a tight season judging by the first four weeks’ scores <puffs cheeks, reassured that being 69th is “ok”> and the “bunching” was a real feature in Week 4…

13 punters scored thirty points or more (even Gary B risked a nosebleed this week!) with seven players laying claims to the £20 weekly prize – a couple had the 4-1 derby 9 pointer and four more had Man City only winning 3-1, which must have really rankled…

Ric P was almost there, but a 96th minute goal for Luton ultimately ended his challenge.

It was left wide open then for Dave Crisp 35 (5) to bag victory – two five pointers courtesy of Huddersfield & Celtic was topped off with 95th minute Forest equaliser securing the vital correct score to see off his rivals.

And if you’re feeling miffed about the aforementioned last minute spoiling 4-1, Dave had 3-1 too…

Congrats Crispy – you wouldn’t consider changing up for 20 x £1 coins and luzzing them at Granit on Sunday would you?!

Asking for a friend…

It was snuggly in the nether regions too this week!

20 of us failed to make the 20 point mark with only 4 PASers failing to register a correct score.

One didn’t get into double figures though.

Meh…most popular score was Toon’s 2-1 win over Brighton– 28 of youse got that!

Chris Dixon was on “Bet of the Week” position 45th in Week 3 so we asked him to provide a treble selection for the £3 “trixie” bet.

“Here’s my trixie selection that is absolutely nailed-on, guaranteed, safer than an oligarch’s superyacht in a UK port, to bring home the winnings this week:
Newcastle United – W
Wolverhampton Wanderers – W
Sheffield Wednesday – W
I can hear the bookmaker’s knees trembling already…”
Yes Toon!
No!
Noooooo!

We need a winner…no pressure!

“Have You Ever Had It Blue”:

Greg Fleming flops down 2 places back to the bottom, one correct score behind Paul H, who in turn is 2 correct scores off Luke S…

“A Solid Bond In Your Heart”:

“My Ever Changing Moods”:

Congrats to those who made through to the money rounds, you’re now guaranteed £20!

In order to be invited to enter the PAS Champions League 2022-23 you will have to finish in the Top 32 after 13 weeks of play. Currently sneaking the last spot is the new boy…Chris Webber!