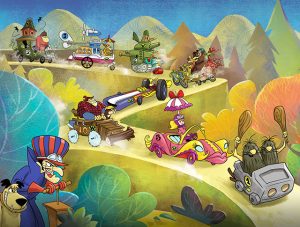 Blimey! It was a bumper week all round with an epic scrap at the top to boot!

If you scored 30 points or more, you we’re one of twenty six – well done youse lot, you’ve brought PAS back from disrepute!

Plenty were in with a shout for the £20 weekly prize…

Martin S, funnily enough, didn’t trust a Scouser and went against Villa – and it cost him.

Neil T was right in mix after nailing Covid FC’s 3-0 Sunday win but then limped home with only one more point from 4 games.

Dan W split the Templeton/Stafford kids power struggle with a Hearts correct score, but then had nothing else to give.

That left li’l Lily T in the box seat, but she decided to “trust the process” only to see Mikel let us all done again.

So, the (advent) door opened for Luke Stafford 41 (8) to claim a season double by way of 3 correct scores on the bounce from the last 3 games of the week!

PAS thinks the kids are alright!

So, not a good week to score less than twenty points, but 19 of you did exactly that.

Everyone managed double figures though!

Worst of the week though was Eddie Osborne 10 (0)…steady!

Bet you all thought you had a good week this week…most popular score was Rangers’ 3-0 win over Dundee– 31 of youse got that!

Seven were all over the 0-3 to the Celtic

7 more got Brentford’s “Desmond” at Leeds

Daniel Hughes was on “Bet of the Week” position 33rd in Week 10, so we asked him to provide a treble selection for the £3 “trixie” bet.

He went off-piste, and…

The boy did good!

Norm, I need your 3 choices for a trixie by Friday, please!

Can you go one better?!

Matthew Murphy stays top but now only 7 points ahead of Jack B, who in turn is eight points in front of Chris D…is it a two horse race now?

Eddie Osborne cascades 6 places to the bottom, one point behind Predictz, who in turn is 8 points adrift of El Presidente…the charge starts here people!

In order to be invited to enter the PAS Cup 2022 you will have to finish in the Top 32 after 13 weeks of play. Currently sneaking the last spot is debutant…Dan Clarke!