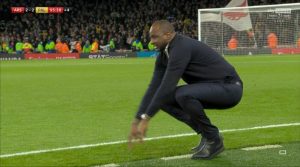 “You Can’t Fool Me Dennis”:

After the points nirvana of last week’s “International Week”, it was back to a harsh reality for most of you in Week 4…

Last week, the average score was 37 points. And this week?

Only 9 players scored 30 points or more!

So, bravo Simon! Looks like that family business motto of “Don’t Give Up, Rise Up!” really is paying off, eh?!

And flee we did – 54 punters failed to breach 20 points this week!

Thirteen couldn’t buy a correct score (some did ask, but, as always, we rebuffed…).

And, 2 poor souls couldn’t even get into double digits.

Alex T, your blushes were spared by the enfant terrible, Rob Currin 6 (0)

Man, this is tough…most popular score was AFC Bournemouth’s 0-2 win at Bristol City– 21 of youse got that!

However, this week’s best correct score, and new correct score of the season, goes to Ben McKeown for his Si-señor-inspired, Watford 0 Liverpool 5!

Rob Currin was on “Bet of the Week” position 45th in Week 3 so we asked him to provide a treble selection for the £3 “trixie” bet.

Nice to win at Troyes – not Nice!

Lens to win at Montpelier – non – not nice!

Reims to win at Brest – non – not nice again!

All a bit merde really Roberto…

Luke Stafford is at 33rd this week….

Luka, I need your 3 choices for a trixie by Friday, please! (ask your dad to send them over!)

Jack Buxton remains top, 3 points ahead of Lee F & his dad, Simon B…

Sam Osmond drops a place to the bottom, one point behind Robert H, who in turn is 2 points adrift of Julian F…

“Diamonds in The Dark”:

In order to be invited to enter the PAS Cup 2022 you will have to finish in the Top 32 after 13 weeks of play. Currently sneaking the last spot are the inseparable…Reagan Karki & Luke Stafford!