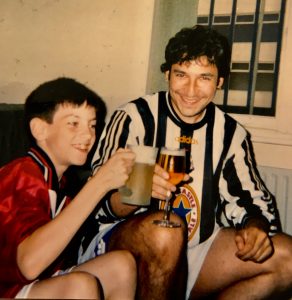 Ummmm, in a sensational week in football, PAS set its own headlines –  so i’ll cut to chase!

An unprecedented sixty five players scored over 30 points this week!

So you know what’s coming…

It gets better – for some…

An unbelievable dozen of youse scored over 50 points!

No one landed in the sixties bracket…

However, lords, ladies and gentlemen – we have a new record points holder!

Please doff your cap to Rich Lee 72 (10) who deserves more than the £20 weekly prize for his efforts this week.

Outstanding performance young man – they should build a statue in your honour on the Wirral for that!  * 72 clapping emojis *

Ever felt deflated? Missed out by one goal, game after game? Changed a 6-0 to a 5-0 based on getting leathered watching a game in Amsterdam during the 1998 World Cup?

To quote Olive, “you’re not alone”…

Only seven players scored less than 25 points this week (Dan? Dave? Is that a record too??!)

Jamie Sellers 17 (0) is properly feeling it this week….

22 landed the 6-0 Netherlands shellacking of Gibraltar

16 had CR7’s merciless deconstruction of Luxembourg

However, this week’s best correct score goes to Patricia Fernandez for her I-wonder-if-they’ll-all-dye-their-hair-again inspired, Germany 2 Romania 1!

Justin Corliss was on “Bet of the Week” position 60th in Week 2 so we asked him to provide a treble selection for the £3 “trixie” bet.

Well, here he is…

“I’ve reached the dizzying heights of 60th. And they say Aussies don’t know anything about football.

Anyway, it seems I need to give selections for the Trixie bet. I have no idea what a Trixie bet is, but here goes, and I’m going to take your comment on board about it not needing to be related to football.

Scotland to beat Israel, both teams to score (happened – just!)

No doubt you’ll put a few of your own hard earned pounds on this nailed on cert and retire to somewhere in the south of France, or Tuscany or Hull.”

Roberto, I need your 3 choices for a trixie by Friday, please!

Jack Buxton moves up three places to the summit, 7 points ahead of Chris D who, in turn, is one point ahead of Mark S in third…

“A Bee Without Its Sting”:

Howard Thomas is down two places to the basement, one correct score behind Sam O, who in turn is 3 points adrift of Matt W…

“Bull In The Heather”:

In order to be invited to enter the PAS Cup 2022 you will have to finish in the Top 32 after 13 weeks of play. Currently sneaking the last spot is James P Sullivan’s mate…Mike Krasnowski!

This! People of Toon!