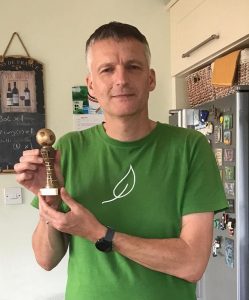 Unlike Forest, Charlie H saw “the wood from the trees” last season…

We’re back! With a bang!

Although given the lateness of this update, I could wax lyrical about “trusting the process” and how karma works (eh Granit?!) and that if you don’t think Palace v Brighton is a derby then you don’t know nuffink!

I’ll cut to the chase as it was all about Toon this week – and, they deserve a break right?

One Geordie quite clearly not in the doldrums this weekend was Dec-a-like (or is it Ant?) Chris Dixon 40 (8) who deftly picked “The Syndicate'” bursar’s pocket just like a little charver at The Hoppings!

Poor Mark S  has West ‘Am’s Michail Antonio to growl at for denying him a weekly win courtesy of that 90th minute goal in (dirty) Leeds.

The irony (or is it coincidence? “Alanis! You about luv…?”) being Chris had 1-2 for the very same match – howay!

So, congrats Mr D, £20 winging its way back to you ASAP – should secure you one of natty Saint-Maximin headbands mate…*cheeky tongue out emoji*

Twenty seven of you managed that but 8 punters couldn’t manage more than 15 points this week  – and one couldn’t muster a correct score (I’ll spare your blushed Maffew…)!

Not as shocking as Brucie’s Newcastle though eh?

Two Magpies not feeling any joy though are Simon Turnbull & Ben McKeown 13 (1) – noway!

It’s gonna be one of those season’s again…most popular score was ‘Wall’s’ 1-1 draw with Forest – 25 of youse got that!

8 got the dull-all at St Andrews

Eight more got 3 goal demolition of Posh by Coventry City

Darren McC, Dave C & Patricia F lapped up the first half joy of Arsenal 3 Them 1

This year, we’re being brave and we’re gonna really shake it up – actually, shake it upside down to be precise!

The winnings will stay on that slot and will be collected by the lucky person residing there at the end of Week 13.

Dan, I need your 3 team treble by tomorrow lunchtime please!

Please be aware we lost quite a few players but we can still gain some more (thanks to those of you who recruited the newbies this season – love youse!) – so if you know anyone out there who wants to get involved, put them in touch! It’s never too late…they’ll get a respectable Mr 2-0 22pts for Week 1 to boot!

In order to be invited to enter the PAS Cup 2022 you will have to finish in the Top 32 after 13 weeks of play. Currently sneaking the last spot are the inseparable…Reagon Karki & Matthew Murphy!