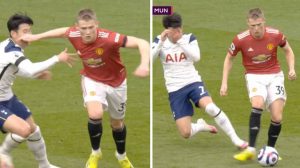 It was a right ol’ ding dong for the Week 9 spoils, arguably as dramatic as the Grand National (do you win?!)! You really had to dig deep for your points this week, fully reflected in the fact that only 13 punters scored thirty or more.

Two of those went beyond, to the 40 point-plus mark and here’s where it really did go down to the wire!

On Saturday at around 5.35pm, Neil T looked set to cap a fine week of correct scores with predictions of Bournemouth and (the incoming) West Ham wins particularly notable. All good.

Then Luton staged their last 10 minute comeback at Wycombe…

Yep, that epic turnaround and a nine point Chelsea prediction was celebrated with the same girl jockey gusto by young Sam Osmond 46 (6) as those fourteen points nudged him to a weekly win over his Godfather! And, even more remarkably, he missed predictions for the Millwall and Watford games too…

Congrats Sam – that £20 is definitely not for betting with. Got that?!

Quite a different story at the other end of the spectrum this week.

Forty players failed to score more than 20 points and 17 (seventeen!) couldn’t sniff out a correct score!

I did my best to thoroughly shame myself (it’s all about the Cup, right?!) in Week 9, but thankfully that accolade goes to Bijay Lama & Simon Lindquist 12 (0).

Just, how?…most popular score was Liverpool’s 2-1 win over Villa– 23 of us got that!

8 landed on the two-two in Lincoln.

And another four thrilled at the thrilling Bournemouth 4 Coventry 1

Neil T & Kate S turned up Brighton 0 Everton 0. Then sobbed a little bit as they thought of those poor souls who actually tuned in to watch it.

Sams A & O got the 1-3 Hatters win over Wycombe

Jazz Sian was on “Bet of the Week” position 65th in Week 8 so we asked him to provide a treble selection for the £3 “trixie” bet.

Sam Osmond is at 11th this week…

Sam, I need your 3 team treble by Friday, please! But ask your dad first that it’s ok to, erm, “place” bets…

Charlie Harris moves up one place to the top of the tree, 1 point ahead of Pete C in second, who in turn is eleven points ahead of Jack B…

Gary Blackburne slides two places to the bottom (ironically after escaping the clutches of Mr 2-0), two points behind Dan H, who in turn is 3 points off Mr 2-0…

All to play for then in the 2nd legs!

Who will make The Final?

In order to be invited to enter the PAS Euro 2021 (with benefits! Read the rules…), you will have to finish in the Top 32 after 13 weeks of play. Currently sneaking the last spot is, by a long throw…James Challinor!

Refs are redundant now aren’t they.

And have you heard “John L” by Black Midi? Now that really is wide on the left…astounding.