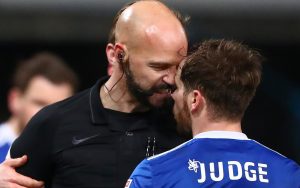 “You WILL pay on time next season…”

I did my scores from a position of excellent preparation, plenty of research and a knowing that it’d be a week that would go as it ought to go…

So apologies for the lateness of this update – i’ve been in shock. And in pubs. Actually that’s a lie. I’ve extended dry Jan to Feb…

Quite a lot of you clearly knew what I didn’t…but not that many for a change! Hurrah for a very random Week 1!

Best of the bunch?

Justin Corliss 23 (3) deftly manoeuvred to the front of the pack thanks to, well, Stoke & Spurs basically!

And therein securing quite possibly the lowest winning score in PAS history. Quite a feat. Considering 18 others could have done it too this week…

If you got 20 points or more this week, you were one of nine – I doff my cap, you jammy…

So, congrats Justin, £20 winging it’s way to you ASAP – you’ve already broke even!

Always the best week to win it – innit!

Did you score more than Mr 2-0 this week?

Wow. To be fair that was quite an achievement…yes, I’m hugging myself in a self conglatulatory manner. And?

34 of youse couldn’t manage that this week.

Not as shocking as Leicester though eh?! <Miguel Almiron emoji face>

One fella wishing he was being more “Brendan” though is Hira Yonzan 7 (0).

What will the family say H??!

In the bleak mid winter…you did very well! Most popular score was Celtic’s 1-2 win at St Johnstone– 22 of youse got that!

4 believed in Leicester. A 3-1 kinda belief…

Danny A, Rowan M & Tom M got the dull-all at Pittodrie

But last season, we did alright. Welllllll, alright(ish)…

We’re being brave and we’re gonna stick with it to see how we go!

So, debutant Lewis Marriott is first up.

Lewis, I need your 3 selections by Friday please! It can be a home, away or draw. It doesn’t have to be football! It can be horses! Or dogs! Or fighting crickets! But not cricket…that’s a step too far!

Let’s get off to a winning start for a change.

Please be aware we may lose some players but we may gain some – so if you know anyone out there who wants to get involved, put them in touch! It’s never too late…and we’re soooooo close to that magical 100 player benchmark, so go get ’em people!

In order to be invited to enter the PAS Euro 2021 (with benefits! Read the rules…) you will have to finish in the Top 32 after 13 weeks of play. Currently sneaking the last spot is the reigning League champion…Danny Ashworth!