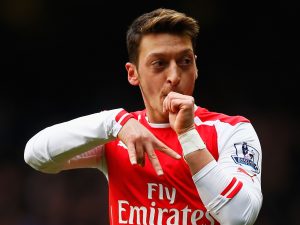 “The American”: It was that SuperBowl thingy on Sunday – did you watch it?

It was super exciting!

Rio’s cameo was effortless cool (nice shirt/cap combo too) and Chappers really is blossoming as a host isn’t he?!

And how good looking was that ex-pro on the panel? (my mate said she’d like to lick his cheekbone…is that a “thing”?)

Did you know it was the first final to go to “overtime”? And the greatest comeback of ALL TIME to boot!

And what about Tom Brady? He even got sacked a few times and still came out on top!!!

Anyway, one person with bleary eyes on Monday morning was Ian Harrison 34 (5) who no doubt whooped & hollered along with Lady Gaga (and that Country fella who didn’t even bother to dress up nice) as he celebrated winning the first £20 of the season. Ian has Blackburn’s late late winning goal to thank (more on that later) for taking him clear of an unlucky Kate S by 3 points…

Congrats Ian – not enough to get a SuperBowl ring but, y’know….

“New Gold Dream (81-82-83-84)”: Imagine being in a gang where you have to contribute in equal measures to ensure you’re not ostracised. Or at least not be laughed at.

Imagine the grief you would get if you didn’t pull your weight, by basically coming up short and not contributing.

Imagine being Bren, I mean, Mark Seels 11 (0) facing the “Syndicate” humiliation this week?

It’s gonna be one of those season’s again…most popular score was Hamilton’s 1-1 draw at with Kilmarnock– 23 of youse got that!

4 got the first “Desmond” of the season – Inverness v Dundee

David G, Predictz & Danny A got the five point 2-2 between Ipswich & Reading

Brett A, Sam A & Rob C got the 3 goal demolition of Champions Leicester

Sam A got the bore draw between Rochdale & Bristol Rovers

However, this week’s best correct score goes to Howard Thomas for his they-can’t-be-worse-than-Palace inspired, Motherwell 0 Hearts 3!

We lost! But, oh, the cruel cruel way it unfolded…

Please be aware we may lose some players but we may gain some – so if you know anyone out there who wants to get involved, put them in touch! It’s never too late…

PAS Cup 2017: Aaahhhh the magic of the Cup! It all started last week!

In order to be invited to enter the PAS Champions League 2017/18 you will have to finish in the Top 32 after 13 weeks of play. Currently sneaking the last spot is…Paul Vinson!