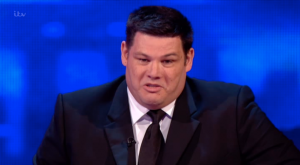 No. Chase ME! I was a playa in Croydon…

“Nice ‘n’ Sleazy”: In what turned out to be a peach of a week for most with outstanding correct scores, only eight bods clocked up 30 points or more. Our Citeh man in the sticks, Neil C, did his “Best” to claim the week’s win but fell short to a Scouser exiled in the desert. Mark J B was probably counting the cheesy nudgers he could ship over from Greggs with his bounty when up popped Mark Fawke 37 (6) to take the spoils and snatch the £20. Ex-Heartbreak High Drazic has Man City’s Ilkay Gön, Ilkay Gëd, Ilkay Güd…that German fella to thank as his 90th minute strike v WBA secured a massive 8 points to take Mr F one point ahead of pack.

Well done Fawkesy, the landlords of the Wirral will be fighting over your custom for the inevitable lock-in celebration…make sure you do it before 12 noon on Sunday though eh?! You could be drowning your sorrows sunshine…

“(Get A) Grip (On Yourself)”: In what turned out to be a b*tch of a week for most getting correct scores, eight bods clocked up no correct scores at all! Imagine if you didn’t even manage double digits??! Imagine if that was you Sam Arora 7 (0)!

Well, it was you Sam…

Beyond me you show offs… – most popular score was Birmingham’s 1-1 draw with the Villa – 33 of youse got that!

7 got Barnsley’s “Desmond” with Bristol City

Olly O, Ryan G & Will O had Arsenal’s deconstruction by a million passes of Sunderland

Tony M got the correctly over-hyped 0-1 at that ground near Ninian Park.

Bry S (welcome!) got the Friday night 0-2 between QPR & Brentford.

Mark F made us all green by happening upon WBA 0 Man City 4.

“Golden Brown“: Tony Morris moves up 3 places to go 2 points ahead of the consistent Clare T who in turn is one point ahead of Jerry S in third.

The Storer family crashed the Top Ten. They’re like them Brownlee brothers. But Yam Yams. But not actually brothers. And don’t do triathlons. Hmmm. This analogy has petered out hasn’t it? Sorry.

“Something Better Change“: Gary Blackburne slips 2 places to the bottom 3 points behind Paul V who in turn is 5 points off the much improved Ian P.

In order to be invited to enter the PAS Cup 2017 you will have to finish in the Top 32 after 13 weeks of play. Currently sneaking the last spot is…contented Gooner, Stuart Fitzsimon!

And Another Thing: It’s all very well making away tickets under £30 when I can’t effing get one anymore….!

Take some interesting pics & remember to add #pabpas so you we can see your pic on the site! Good work Robbie C!